Exhibitor Registration is now open, and Event Tickets are now available for purchase!

The 2022 Sierra-Cascade Logging Conference Expo over!

The first leg of the IHGF Stones of Strength qualifying series produced a world record in the overhead stone press, Francis Brebner reported to IronMind.

The Sierra-Cascade Logging Conference was the host and main sponsor of two major strength events held at the Shasta District Fairgrounds, in Anderson, California: the first leg of the IHGF Stones of Strength qualifying series, followed the next day by the World’s Strongest Logger. Large crowds cheered on the strength athletes in the two days of heated battle.

California’s Casey Garrison, who was looking excellent at a lean bodyweight of 285 lb., super strong and fast, put up an impressive all-round performance to clinch the victory in both days of very heavy competition. Prior to the competition, Garrison had sustained a niggling knee injury while pressing a heavy stone overhead, but the Californian shrugged it off and soldiered on like a true Celtic warrior.

In the 55-lb. stone throw, any style could be used in the 3 m run from the trig, with 3 attempts. Garrison blasted out a fantastic series of putts, with a best of 23’ 8” to set a new IHGF national record. Second was Nathan Goltry with 21’ 1”, with Romero in third at 20’ 8”. The 300-lb. stone carry was done over a course for max distance with no time limit. Goltry’s 257’ was topped by Garrison, who is known for his tremendous stone carry abilities, at 265’ for his second victory.

The Dinnie stone walk was comprised of a set of stones with a combined weight of 660 lb. for max distance, with three drops allowed and no lifting straps could be used. Goltry put up a good show with 32’ 1” for third; Gary Lloyd did 36’ 6" for second; and Garrison once again pulled off the win with a distance of 48’ 7”. Just to note, on his first lift and drop, he managed an incredible 32’, setting a new IHGF record.

Dinner Friday evening was hosted by Lumberjack’s Restaurant in Redding where the World’s Strongest Logger competitors and crew made them live up to their motto “Where the Big Boy’s Eat”. Owner Jeff Garrett and his crew did an outstanding job of satisfying these immense appetites, so they could be at their best for the challenges awaiting them on day two of the competition.

Held on day two, the World's Strongest Logger competition was a herculean test of overall strength and conditioning, with six grueling events. In the log press overhead, athletes started at 300 lb., with 20-lb. jumps each round. All succeeded with the opening weight of 300 lb., with six athletes making 380 lb., and just three prevailing at 400 lb.: Casey Garrison, Alex Bromley, and Dylan Bartz. Bromley nailed the 410-lb. log for the win and a new IHGF log lift world record; Garrison and Bartz tied for second place at 400 lb.

In the log deadlift, athletes had 60 sec. to complete five lifts, from 600 to 800 lb., with the weight increasing by 50 lb. each round. Gary Lloyd won the event, completing all the lifts in 12.70 sec. Second place was close, with Garrison edging Nathan Goltry by doing all five lifts in 14.16 sec. to Goltry's 14.25 sec.

In the keg over the bar, six full-size kegs weighing 30 to 55 lb. were thrown over a bar set at 18’ in a time of 60 sec. Garrison dominated the event, the only athlete to clear all six kegs, doing this in 34.20 sec. Easton Taylor and Lloyd both cleared four kegs, with second-place Lloyd posting a slightly better time of 21.67 to third-place Taylor at 22.04 sec. 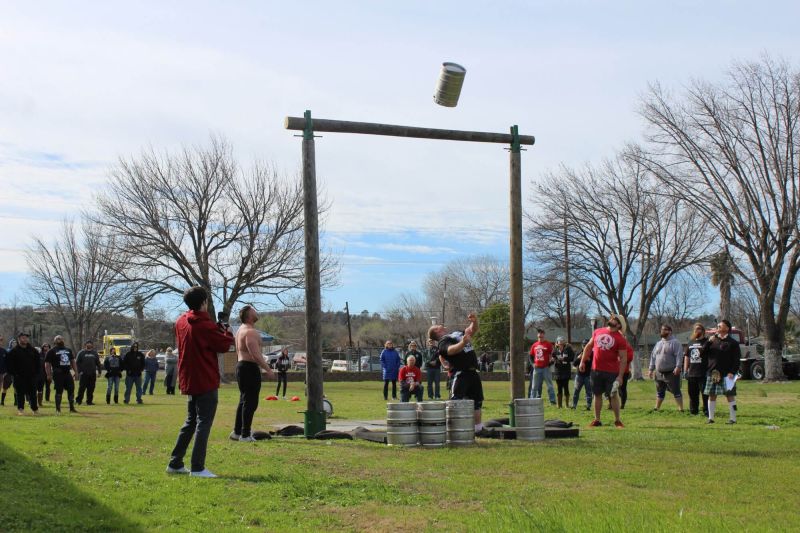 The Fingal's Fingers was a real lung buster as the athletes pushed over a series of 14’ logs ranging from 380 lb. to 580 lb. Taylor’s early lead of four fingers in 58.79 sec. was overtaken by Goltry in 44.43 sec., but Garrison stole the show, completing all five fingers in 88.14 sec.

The weekend was one of the best two-day formats I have been involved with, and from start to finish the events ran like clockwork, the spectators were great, and the competition was fantastic. Double-winner Casey Garrison will compete in Fefor, Norway at the IHGF Stones of Strength World Challenge in June and hopefully bring the title back to the USA. The IHGF and the athletes would like to thank Ted James, the past president of the Sierra-Cascade Logging Conference, and all the sponsors for making this event happen--even bigger than last year--with two new world records and one national record set. The IHGF would also like to thank Dennis and Russell Garrison and their crew for all their hard work in making the equipment for both the IHGF Stones of Strength and World’s Strongest Logger.